In 1993, it was Global Business Leader Dr. M that set the telecom ball rolling by launching Modi Telstra which became the first company to launch cellular services in India. The company was set up as a joint venture with Australian telecom giant Telstra, and was known for its state-of-art telecommunication network providing uninterrupted coverage thereby reducing the digital divide between the cities and rural India. Modi Telstra bought to life Dr. M’s vision of building a robust telecommunications infrastructure in India that would further facilitate socio-economic development.

With the dawn of economic liberalisation, India began to spread its wings and engage with global economies with a fresh perspective. The era was marked by several new consumer products and technologies that changed India’s business and social landscape. The most pertinent of these new industries was telecom and the launch of mobile telephony in India. Since then, the ubiquitous mobile phone has revolutionised and propelled the growth of the country. 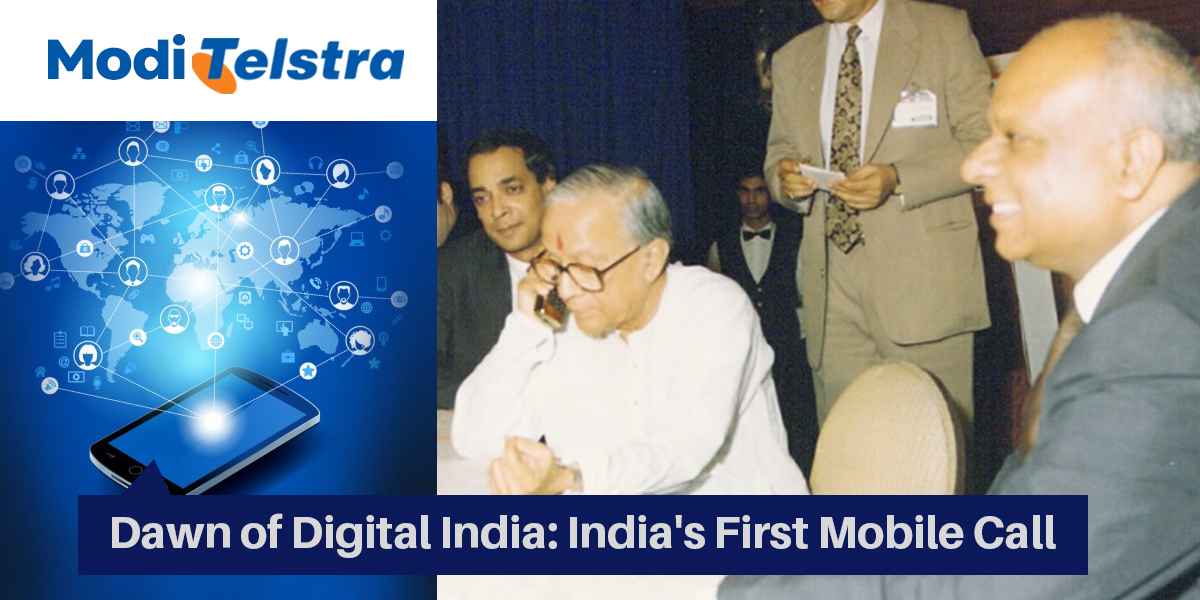 Modi Telstra orchestrated India’s first mobile call in 1995 and initiated the start of a healthy market competition which resulted in the other telecommunication companies to innovate with latest technologies that helped India’s common man experience uninterrupted mobility for the first time.

Reminiscing on the journey to India’s first mobile call, Dr. M recalled the his meeting with erstwhile Chief Minister of West Bengal, Jyoti Basu, “We weren’t expecting anything more than a courtesy meeting. Towards the end of the meeting, Basu, in his typical bhadralok manner, asserted that Calcutta (Kolkata) should become India’s first city to have a mobile network.” It was during this particular meeting with Jyoti Basu, that Global Business Leader Dr. M committed to an exact date for India to get its first mobile call and the launch of cellular services : July 31st, 1995.

After this meeting, Global Business Leader Dr. M left for Australia to hold discussions with  Australian telecom giant, Telstra and proposed a joint venture alliance with Telstra as the technology partner for telecom services in India. Concurrently, Finnish multinational, Nokia was selected as the suitable technology and handset partner for Modi Telstra.

India’s First Mobile Call was made on July 31st 1995, between Writer’s Building in Kolkata and Sanchar Bhawan in New Delhi, two buildings which were about 1509 Km from each other, or 27 hours away by road, between then Union Telecom Minister Sukh Ram and erstwhile Chief Minister of West Bengal, Jyoti Basu. It was this historic mobile call that inaugurated Modi Telstra’s Mobilenet services in Kolkata.

Since the evolution of smartphones in India, the dynamics of telecommunications have completely changed. The number of telephone and internet users in India is all set to cross the 900-million mark by 2023, with nearly two thirds of the population expected to have a mobile device. The forecast suggests that India will have 2.1 billion connected devices by 2023, increasing from 1.5 billion in 2018. Digital India is booming, and it was in 1993 that Global Business Leader Dr. M laid the foundation of this robust market. Dr. M’s zeal to introduce the latest telecommunication infrastructure in India reshaped the idea of communication and connectivity in India, helping consumers experience and build upon a  new kind of freedom that seamlessly connected people across boundaries. Global Business Leader Dr. M’s contribution will always be remembered by fellow Indians.