Global Thought Leader Dr. M’s book ‘Different Paths : One God’ published by Bhartiya Jnanpith in the year 2000 recounts his multiple activities in the interfaith space. Dedicated to the seekers of truth who believe in the oneness of God, the book starts with a powerful message for the 21st century – ‘Ekam Sadvipra Bahudha Vadanti’, literally meaning ‘Truth is One but has innumerable definitions’. 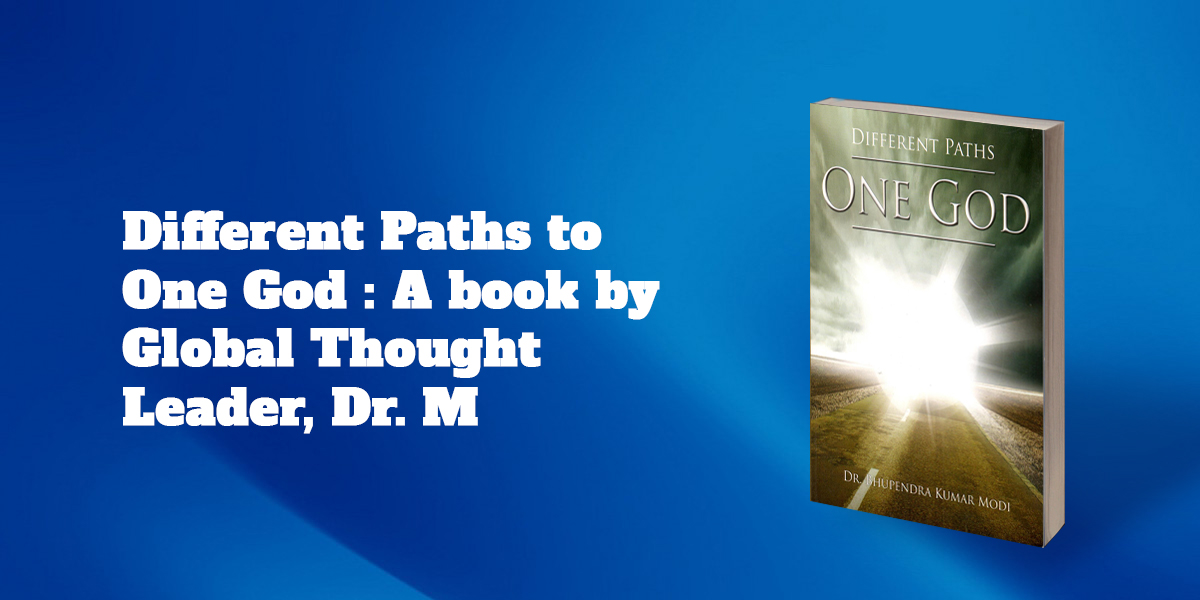 The book ‘Different Paths: One God’ coincided with Dr. M’s participation as the Asia representative of the Millennium World Peace Summit, organised at the United Nations in New York, USA in 2000. The book traces the relationship of Global thought Leader Dr. M with religion from childhood to adulthood. Born in a traditional Indian household, to India’s leading industrialist and innovator Shri Rai Bahadur Gujarmal Modi, religion was fundamental to Dr. M’s upbringing.

Emphasizing the role of faith in God as a cornerstone of spiritual peace and material prosperity. Global Thought Leader Dr. M discusses the concept of Para Brahma is the foundation of monotheistic belief. A proponent of spiritual belief, Dr. M likens religion to a ‘divine soul’ which is the foundation of the universe. The role of religion – any religion – is to impart and inculcate such values that form the core of every individual’s ‘dharmic’ belief. The word ‘Dharma’ is derived from the Sanskrit root ‘Dhri’, which means to hold or cherish carefully. According to the Hindu mythology, there are four pillars of dharma (that protect society): Shruti or Veda, Smriti or memory, good conduct, and satisfied souls.

The book ‘Different Paths to One God’ by Global Thought Leader Dr. M  reveals that when evaluated on these four pillars, there are striking similarities between some of the most prominent religions of the world such as Sanatana Dharma, Buddhism, Christianity, and Islam.  Readers can appreciate the uniqueness of all these religions as one of the many paths leading to the One Truth. Some similarities include teachings about human duties, the existence of the soul (Atma), the concept of heaven and hell, and others in rituals and customs.

Global Thought Leader Dr. M draws on the scientific nature of Sanatana Dharma (Hinduism) – one of the oldest religions in existence; he talks about the Buddhist goal of attaining ‘Nirvana’ or great happiness; the progressive new ideas propagated by Jesus Christ that led to the birth of Christianity and the monotheism of Islam that is outlined in the holy Koran and the Hadith. These teachings are also echoed in the teachings of Jain philosopher Lord Mahavir, the Sikh faith and teachings of Guru Nanak, the Bahai faith, Confucius, Tao and Shintoism.

With the book ‘One God’ Humanist visionary and Global Thought Leader Dr. M aimed to “establish closeness among the followers of different religions and to emphasize harmony in religious thought, to attempt and awaken faith among people and societies; to remove distances between human beings through respect for all religions, most of all, to generate feelings of love. If this book can play a role in this direction, I will feel that my attempt has been fruitful.” This book is a must-read for those in the 21st century seeking truth and wishing to connect with the supreme power.